A dry, full-bodied, incredibly complex bottle of white for $250+? Are we in Burgundy, or Bordeaux, perhaps? Nope—we’re cater-cornered from the two, within the Loire Valley village of Saumur. Here, you’ll find Clos Rougeard’s famed “Brézé” bottling, which is entirely sourced from the eponymous vineyard of iconic Château de Brézé!

Amazingly, not only is today’s bottle a fraction of the cost of Rougeard, it hails from Château de Brézé’s most cherished organic parcel: “Clos de la Rue.” At this mind-boggling price, you’re getting the ‘Grand Vin’ of an estate historically known for crafting some of the greatest white wines in Europe—bottles that were so revered, they were regularly traded for Château d’Yquem. Wines from Château de Brézé were nothing short of national treasures back then and, at long last, their brilliant revival has once again made them modern-day showpieces for the dinner table and cellar. A cutting-edge, barrel-aged Chenin Blanc with mesmerizing complexities and seemingly limitless aging potential? Don’t hesitate!


Château de Brézé has been talked about in literature dating back to the 1400s when their wines were served at all the royal courts of Europe and enjoyed by society’s elite. However, the estate fell into disrepair for most of the 20th century and its renown was all but lost. A major lifeline came in 2009 when the property was purchased by Le Comte de Colbert, who then went on to build the very best team for renovations and organic implementation. One of these key players was Arnaud Lambert, who was given free rein to bring life back into the vines so they could reach their full potential. The results of their natural farming and updated cellar is astounding—the wines have once again begun expressing themselves as the greatest expressions of French white wine. As they say, history has a way of repeating itself...
The hill of Brézé is full of a soil known as tuffeau, made from fossilized sea organisms compressed over tens of millions of years. This soil is very similar to the chalky soils found in Chablis and Champagne, and similarly yields wines which are incredibly mineral driven. Though the Brézé vineyard sprawls across dozens of acres, “Clos de la Rue” is one of their many walled parcels that traps warmth and blocks whipping winds allowing for more phenolic development and slightly richer wines. Within this insulated zone, 30- and 60-year old vines are buried in sandy limestone sois with deeper layers of clay and the region’s signature tuffeau. In the winery, the hand-harvested grapes undergo a long, ambient fermentation (without malolactic) and the resulting wine matures in French oak barrels, ~35% new, for 12 months. Afterward, the wine is blended and transferred into stainless steel tanks for 6+ months of settling.
“Clos de la Rue” spills out with a bright straw-yellow core and heavily refracted silver hues moving towards the rim. Its perfumed intensity reveals itself almost instantly, wrapping you up with powerful stony/chalky minerality and exotic fruits like white peach, yellow apple, tangerine, Key lime, lanolin, lemon blossoms, and acacia. Bone dry, medium-plus bodied, high acid, and deeply mineral, this bottle is archetypal blue chip Chenin from Château de Brézé. Intense citrus blends with flashes of orange and white pear all while maintaining a high-note consistency due to towering waves of savory earth and crushed rock minerality. It’s a real powerhouse white that wholly defines grape and region, so be sure to treat it as such: If drinking right now, do so with proper air and food. I recommend a vigorous decant for 60 minutes, or pulling the cork 3-4 hours prior to drinking in Burgundy stems around 55 degrees. Like the finest whites of the world, this will age a very long time—expect it to start firing on all cylinders around 2022 and staying in a prime drinking window until 2030. Even still, don’t feel rushed when that date does arrive; these bottles can last decades if stored properly! When opening your first, prepare the attached sole and watch Chenin Blanc’s laser-sharp acid slice right through the creamy lemon sauce. It’s a pairing that never gets old!


“Colloquially known as “Chenin de Brézé” in centuries past, Château de Brézé is once again crafting ageworthy, fascinatingly complex whites that must be added to everyone’s bucket list. Today’s “Clos de la Rue” is the apogee of their lineup, and it is a phenomenal achievement.”
—Ian Cauble, Master Sommelier 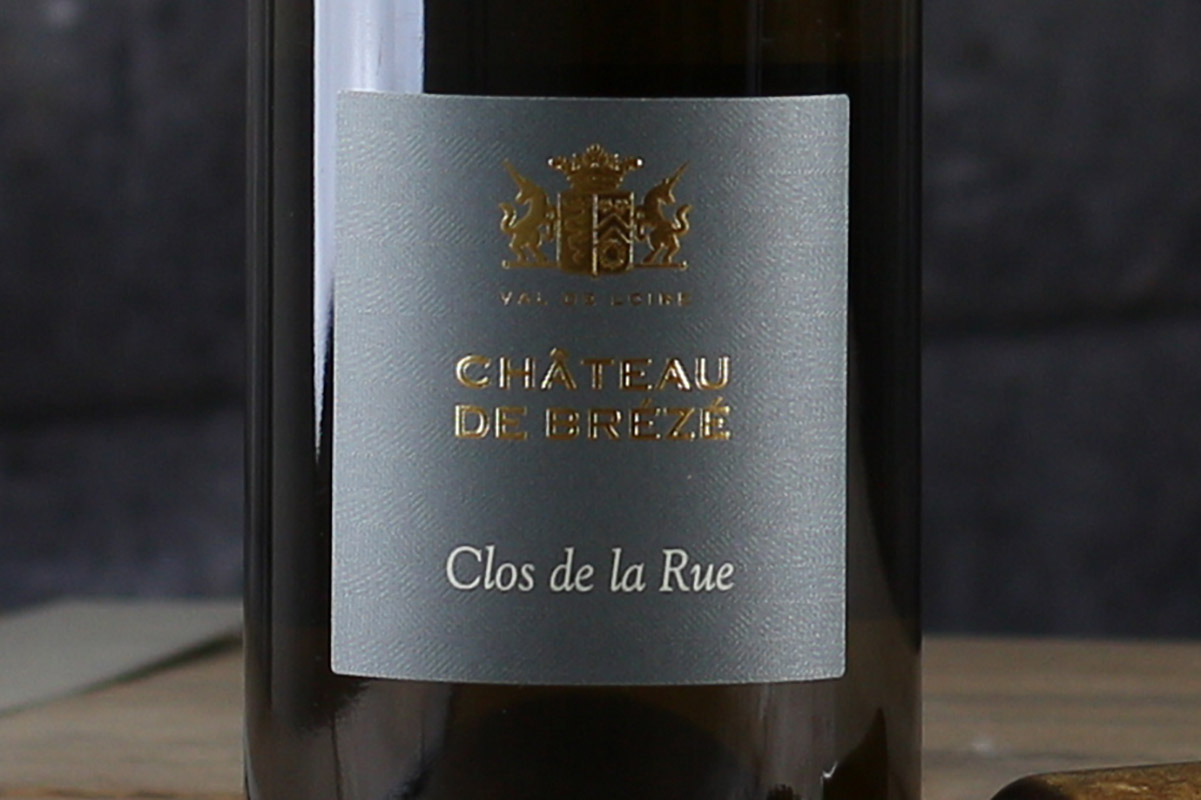