What a journey and what a wine. Today’s offer is a rare example of a bottle that single-handedly opened my eyes to a new and exotic wine frontier—which I was thrilled to explore firsthand just two weeks ago!

SommSelect’s Mark Osburn and I wound our way into the undulating, sheep-and-shepherd-covered hillsides of Morocco, where an ever-growing feeling of isolation consumed us—to the point where we wondered if our destination really was one at all. Our GPS was useless, but still we forged ahead and eventually found ourselves white-knuckle driving in the remote village of Had el Brachoua, weaving through school children, donkey carts, and Burqa-clad women. Finally, we were there: La Ferme Rouge. And within seconds, winemaker Jacques Poulain announced himself loud and clear, a boisterous French-turned-Moroccan locomotive who found tranquility among his sprawling vines. His wine, one of the very few I’ve tasted from Morocco, exceeded all expectations. We shouldn’t have been surprised: Jacques is a master of Syrah who has quickly become the name to know in Moroccan wine. Incredibly pure and deeply fruited with a brilliant terroir imprint, his wine channels all the classic notes of Syrah at a price that deserves a standing ovation. If blind tasting this 2016 La Ferme Rouge doesn’t take you to the heart of Northern Rhône, you will at the very least label it top-quality Syrah. Love exquisite reds? Love new experiences? This is one for the books!


Located in the Zaër wine appellation, about an hour’s drive southeast of Rabat, La Ferme Rouge (“The Red Far”) first began as an agricultural estate in 1908, with the construction of the winery occurring in 1933. Later on, in the 1990s, the owner began selling grapes to Jacques and, after a long-awaited meeting, the two joined forces and formed La Ferme Rouge winery. Over the last two decades, they have undertaken major renovations and initiated a massive shift to sustainable farming in the vineyards. Additionally, when Northern Rhône superstar Alain Graillot started his new “Syrocco” project in Morocco, he sought out Jacques to help make the wine. Put simply, Jacques is among the most influential winemakers in the country, and Syrah is his specialty.

Today, La Ferme Rouge employs more than 400 locals. While an impressive number, the figure was lost on us until we reached the literal pinnacle of our tour. We scaled some stairs and tiptoed along metal catwalks (OSHA would’ve had a field day), stopping to absorb the breathtaking sunset. Then, Jacques turned us around to face the village and extolled to the world “the beauty of Ferme Rouge.” Hundreds of houses came into view, many of them painted a deep scarlet. “Before we come, nothing, Jacques said, “now, the houses painted red are lived in by those who work here.” We were floored. They single-handedly breathed life into a village by way of wine. (For more about our Moroccan adventure, check out Mark’s post over on our blog.)

The winery currently owns some 900 hectares (2200 acres!) of land; while some are uncultivated, most is planted to an array of crops with a massive portion dedicated to olive trees and, of course, wine grapes. Miraculously, they do all of this without a trace of herbicide. Jacques doesn’t believe in it—he wants his wines to reflect both the maritime climate and the rich soils, which range from sand to shale to clay-limestone. Depending on the vintage, “Terre Rouge” is predominantly Syrah from 40-year-old vines with small amounts of Tempranillo (!)—today’s 2016 is nearly 100% Syrah. Entirely hand-farmed and made at their winery, it undergoes a traditional fermentation in concrete tanks and ages in used Burgundy barrels before bottling.

Although I had tasted the 2016 “Terre Rouge” with its American importer a few weeks before my visit to La Ferme Rouge, it was impossible not to be floored by it again, both during an intimate tasting with Jacques and a few hours later next to a whole rack of grilled lamb and the largest bowl—basin, really—of couscous I’ve seen in my life. All three times, a deep purple, deeply perfumed wine unfurled in the glass. It’s an explosive yet silky beauty, a real Syrah achievement. Within seconds of opening, the wine is ready to rumble, bursting forward with ripe black and blue fruits like cassis, wild blackberry, and Damson plum. After a few swirls, fresh violets and rose petals also emerge alongside crushed rock, black pepper, olive tapenade, and garrigue. The palate boasts polished tannins and ripe fruit perfectly balanced with savory mineral components. As this is an emerging wine region, crafting wines for longevity isn’t the philosophy just yet, so I recommend consuming this over the next few years after an optional 15-minute decant. We can’t possibly think of a better pairing than the one we had at the winery—a full rack of lamb ribs with couscous—so prepare a grilled lamb dish if possible. Serve in large Bordeaux stems at 60-65 degrees and ready yourself for a brilliant gastronomic ride. And one final word to the wise: Don’t short yourself on bottles!

“Our recent travels to the ancient lands of Morocco landed us at La Ferme Rouge and resulted in the experience of a lifetime. Crafted by one of Morocco’s leading Syrah pioneers, this bottle will answer the question we know you’re asking: “Can it be good?” Oh yes.”
—Ian Cauble, Master Sommelier 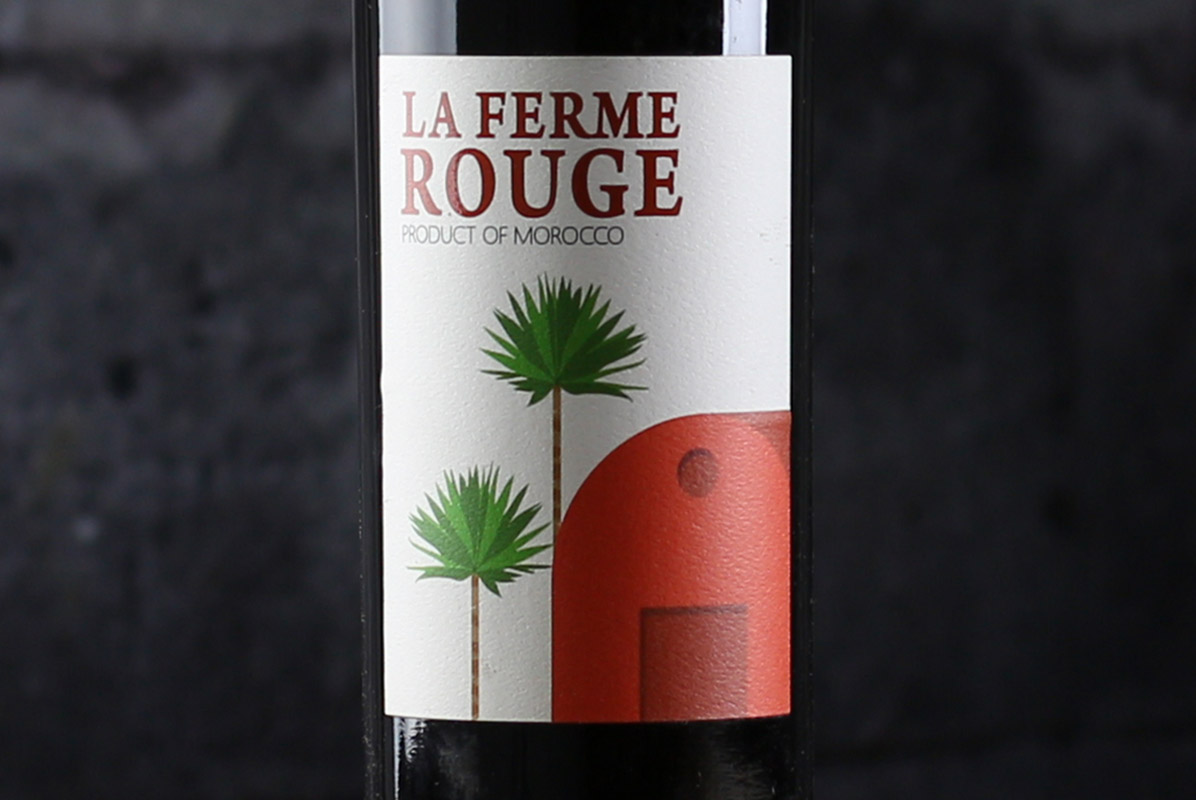